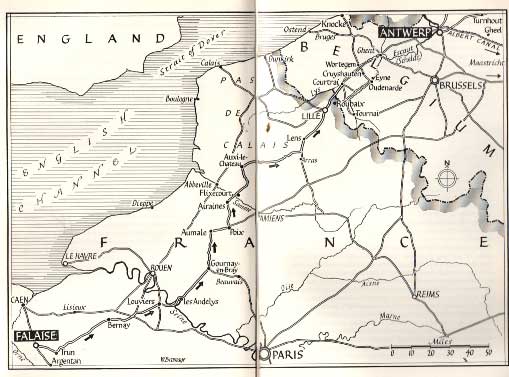 During the last stages of the Battle for Normandy over the first 2 weeks of August 1944, 3/4CLY were involved in a number of battles. The Germans put up a fierce resistance in very close Bocage country where any movement off the road was almost impossible. 3/4CLY. By 18/19 August however that battle had been won. The German forces had either been cut off by the allied advance or had escaped through the Falaise gap and were on their way back to the Dutch or German border.

The Regiment had a quieter week while plans were made to organise the pursuit.   4th Armoured Brigade including 3/4CLY were responsible for the left flank of this advance. It started on 24 August when they moved 57 miles from the Falaise area to the River Seine but were then held up for 3 days waiting to cross the one available Bailey bridge. Once across the Seine the roads were clear and the Regiment motored. At Gournay, for the first time in this campaign, they received a great welcome from the local population and also encountered the French Maquis resistance fighters. Two days later they were crossing the Somme entirely unmolested, noting the problems which their fathers had had in 1916-18.

On 5 Sept, the Regiment covered nearly 100 miles, crossing into Belgium near Roubaix. They were now faced with large German forces retreating from the Calais area and for two days they were involved in some sharp encounters in the Audenarde area.

Finally on 8 Sept they set off on the final 60 miles to Antwerp which had been captured a few days earlier by 11th Armoured Division (under General ‘Pip’ Roberts). However only two thirds of the city had been cleared of Germans. This part including the business areas, shopping district and better residential areas carried on as if the war was over. As Jimmy Sale’s photograph below shows, 3/4CLY were at first parked in this area where they were able to enjoy the amenities including their first bath for 3 months. Every now and then a cluster of shells would arrive and everyone would take cover but after a few minutes the buses would start and the streets were crowded again.

3/4CLY were eventually deployed to the Docks area where the tanks found themselves engaging motor launches and river boats full of Germans trying to find a way east. After a few days this exodus stopped and the Regiment was able to relax in a friendly and civilised environment. The regimental football team even turned out to be defeated by the local football team 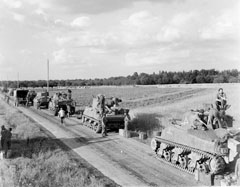 Replenishment on the road during the march to the River Seine.

24 Aug 44
Started move to LE SAP but after 4 miles held up by traffic congestion. Pulled off the road and leaguered for the night. 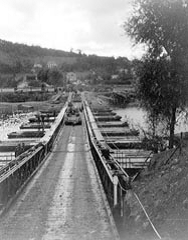 Bailey bridge over the River Seine

30 Aug 44
The Regiment advanced with C Sqn leading and reached GUERNAY, mopping up operations on the way, many prisoners taken.

31 Aug 44
Regiment in reserve, assisting in the cleaning up of VILLERSMONT & BAZANCOURT with the assistance of the FFI and then moved to the X-roads at St. CLAIRE.

1 Sept 44
Moved on from the crossroads at St. CLAIR M.7642 towards the SOMME. Cleaned up several villages en route and took about 300 POW. At 1600 A Sqn attacked AIRAINNES M.8568 with A Coy KRRC. Very strong resistance and some A/Tk guns, two of which were knocked out. One tank was hit and brewed up. The Sqn withdrew at last light and the attack continued by a stronger formation of the Canadian Army.
Leaguered in area M.8773 overlooking the SOMME.
Claims:-    2 75mm A/Tk guns, approx 6 MT.
Casualties:-     1 OR killed, 1 wounded. 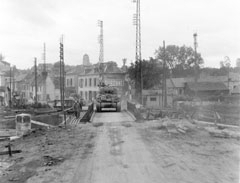 The Bailey bridge crossing of the Somme at Picquiny.

2 Sept 44
Moved across SOMME at 1230 with C Sqn leading. Contact made with the enemy North of ELEXECOURT M.9674, when C Sqn observed a troop of 88mm guns shelling across the SOMME. The gun position was overrun and many prisoners taken. The advance was continued and the village of AILLY cleaned up, 6 88mm guns having been captured.
Leaguered for the night at M.9079
Claims:-    9 88mm guns, approx 100 POW.

3 Sept 44
At first light took up positions on the high ground North of AILLY and later in the morning made contact with the Canadians and the Poles.
Moved on without opposition to the high ground overlooking AUXI M.9996 which was reported to be strongly held by the Germans. A Sqn shot up some MT and HDT seen moving out of AUXI to the North. Inspection made of first Flying Bomb site seen, which had been completely destroyed by the RAF.
Leaguered night at M.9896.
Claims:-    Several MT and HDT knocked out (number unknown). 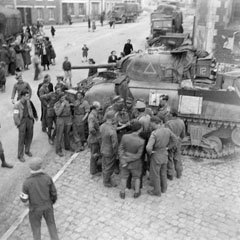 'A' Squadron HQF control tank in the square at Auxy-le-Chateau.

4 Sept 44
Moved through AUXY which had fallen overnight to an infantry attack, captured one 88mm gun. Took up positions North of the town and spent the day in maintenance.
Claims:-    1 88mm gun. 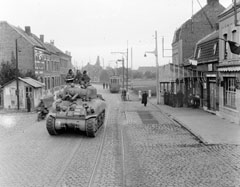 Crossing the frontier into Belgium at Roubaix.

6 Sept 44
Moved on to the North and took up positions NW of AUDENARDE J.0958 on high ground with instructions to protect the L of C running through AUDENARDE. Contact was made with the enemy at the villages of WORTEGEM, KNOCK and NOKERE, many guns and lorries were destroyed and many prisoners taken. A Sqn pushed on to the town of CRUYHAUTEN, killing a large number of enemy infantry. Contact was made with a patrol of 11th Hussars. The town was full of enemy troops hiding in the houses and it proved impossible to deal with them without adequate infantry support. One of a large number of prisoners surrounding a tank threw a hand grenade into its turret, killing two of the crew. Later a German tank managed to position itself unseen and knocked out 2 of our tanks. Eventually the Sqn was forced to withdraw as it could no longer hold the town without further infantry support. Leaguer was made North of the AUDENARDE road and there was no contact with the enemy during the night.
Claims:- 16 x 75mm infantry guns
1 x 88mm A/Tk gun
20 x MT uncounted number of HDT

7 Sept 44
Took up position again on the high ground facing NW. C Sqn took over 200 POW from a column attempting to escape East of KNOCK. Local members of the Belgian Resistance Movement were usefully employed in escorting prisoners and in patrol work. B Sqn shot up a number of HDT and MT. In the late afternoon 6 enemy vehicles attempted to break through KNOCK but were shot up and several prisoners taken. At last light, placed under command 53 Div and ordered to move the following day to ANTWERP.
Claims:- 12 MT, uncounted number HDT
300 POW 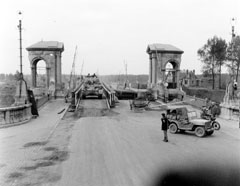 Arriving on the outskirts of Antwerp

8 Sept 44
Moved to ANTWERP and took up positions, A Sqn patrolling East bank of SHELDT with members of the Resistance movement. B Sqn in the dock area, C Sqn East of the city with a troop in the village of WYNEGHEM D.7696. Some shelling and mortaring but no casualties. 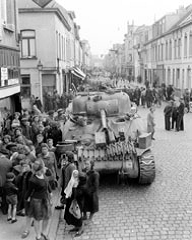 People of Southern Antwerp talking to members of the Squadron half of which by now was inside their houses having their first real bath since D Day. 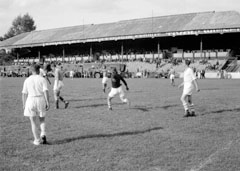 The regiment playing the ANTWERP football team in the stadium at ANTWERP.