70 Years On 3 CLY and 4CLY amalgamate

The first two months of the heavy fighting in Normandy had taken a heavy toll not only of the two Sharpshooter Regiments but of the Royal Armoured Corps in general. It was becoming increasingly difficult to find sufficient trained personnel to replace those killed and wounded in battle. The decision was taken therefore to reduce the number of armoured Regiments in Normandy and to bring the remaining regiments up to strength by cross-posting from those disbanded Regiments.

This reduction affected mainly Regiments which had been created since the outbreak of war. As the Sharpshooters were the only Yeomanry Regiment which had both its Regiments serving in Normandy it was decided to amalgamate them under the title of 3rd/4th County of London Yeomanry (Sharpshooters). There was inevitably resistance from the supporters of both Regiments but it was apparent that both were below strength following the battle of Villers Bocage and subsequent operations around Caen.

The command of the amalgamated Regiment was given to Lt-Col W Rankin, a regular officer who had taken over 4CLY after Col Lord Cranley had been captured at Villers Bocage. He largely kept intact his 4CLY RHQ. A Squadron was kept intact from 3CLY (which meant that Capt Jimmy Sales could continue his unique photographic coverage of the Sharpshooters at War), C Squadron was retained from 4CLY and B Squadron was formed from a mixture of the two Regiments.

It was inevitable that many long standing members of one or other Regiment had to be found other jobs where they could recoup their health and where they could pass on their valuable experience.

The other choice which had to be made was which higher formation should 3/4CLY become part of. Although there was a strong case for remaining part of 22nd Armoured Brigade/7th Armoured Division (Desert Rats) in which one or other of the Sharpshooters Regiments had served since 1941, it was decided that they should form part of 4th Armoured Brigade 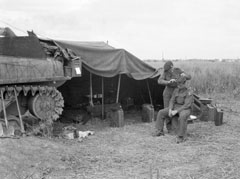 A 3CLY tank bivvy on the plains near CARPIQUET. Tpr.
Dawson getting his hair cut by L/Cpl. Johnnie Davies

29 July 44
Under command 2nd Canadian Corps. 4th CLY arrived and conferences were immediately started to discuss the composition of the 3rd/4th CLY

30 July 1944
Further conferences. Commanding Officer's parade. Lt Col AA Cameron DSO MC addressed the Regiment and informed them of the forthcoming amalgamation and the reasons for it. 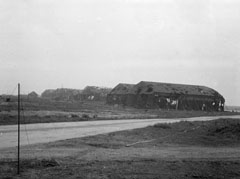 26 July 44
Regt continued to engage enemy infantry and SP guns. Indirect (RHA) and direct fire was immediately brought down on any German infantry who showed themselves. An air OP, controlling Typhoons, brought down intensive rocket attacks on targets indicated by us, and on tanks etc behind the far ridge to which they withdrew out of sight whenever we fired at them.
In the afternoon 1/5th Queens took over Regt positions and the Regt moved back to 1000 yards West of IFS. We claim one SP KO.
27 July 44
Enemy shelling of IFS and surrounding roads. Considerable ammunition was expended by the enemy shelling a block-house on the crest in front of B Sqn, it was unoccupied.

28 July 44
Enemy shelling of IFS and surrounding roads. Considerable ammunition was expended by the enemy shelling a block-house on the crest in front of B Sqn, it was unoccupied.

29 July 44
Remained at CARPIQUET, proceeding with details of amalgamation. 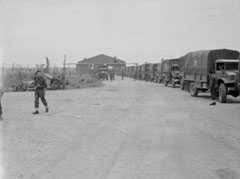 Transport of the 4 CLY by the CARPIQUET hangars, preparing
to move off after the amagamation of the two Sharpshooter Regiments

1 Aug 1944
In area CARPIQUET under command 30th Corps and at immediate notice to move. 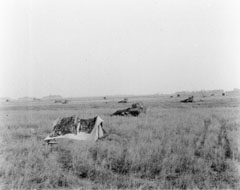 The 3/4th Sharpshooters' leaguer at CARPIQUET. 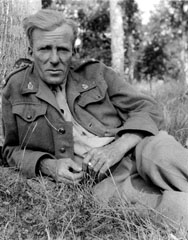 A personal letter to Lt Colonel Rankin from General Montgomery reads us follows: