Mid July 1944 saw 3CLY and 4CLY engaged in major battles either side of Caen which proved to be their last battles as separate Regiments.

In the build up to this operation, the 4th Armoured Brigade commander, Brigadier J.C.Currie DSO MC was killed by shellfire while holding an O group of his commanding officers. Lt-Col ‘Sandy’ Cameron took over command of the  Brigade for a while until replaced by Brig R.M.P.Carver. 3CLY lost Major Bobby Gale MC (& bar) who had joined three years earlier as a 2nd Lt and had progressed to OC C Squadron. He was killed when a shell hit his tank.

Operation CHARNWOOD was an advance across the R.ODON in the south west outskirts of CAEN and was part of the ongoing operation to take CAEN which the British had narrowly missed taking back on D-Day. 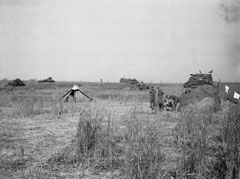 A Squadron Leader in the cornfields South of CARPIQUET.

3CLY War Diary
10 July  44
Move to concentration area at 9466 NE of MOUEN. Moved across river ODON during the afternoon and took up battle positions in support of 43 Div.
Major Gale MC, fatally wounded by shell fire and several officers wounded during periods of intermittent shelling.
A Sqn made contact with 2nd Seaforths near JUMEAUX. Enemy infantry and tanks were reported on the ridge running East from ETERVILLE to LOUVIGNY and A Sqn were ordered to establish a standing patrol on this ridge. 2Tp were sent up under artillery concentrations and engaged and put to flight enemy infantry visible among trees on the summit. Two further troops took up positions on the ridge and engaged 3 Panthers - 2 of which were knocked out without loss.
C Sqn under command of Capt. Pearson 2i/c took up a position to the West of A Sqn and inflicted heavy casualties on enemy infantry attacking ETERVILLE. At last light 4 Panthers and 1 Mark IV appeared and 2 Panthers and the Mark IV were destroyed without loss, the remaining 2 Panthers came under fire from the Royal Scots Grey and were destroyed.
B Sqn remained in reserve and the Regiment withdrew at last light to leaguer in area 9764.
Casualties:-
Killed -Major RF Gale MC
-Sgt King
Wounded -Capt. JC Sturrock
-Lt CJ MacGregor
-2Lt RA Leach
11 July  44
Same positions resumed at first light. During the morning the enemy put in a counter-attack on ETERVILLE. The attack was beaten off with heavy casualties to the infantry and A Sqn knocked out 3 Tigers, 1 Mark IV and 2 SP guns, a number of others hit and probably damaged. C Sqn under command of Capt. Murray destroyed 1 Tiger. Our loss was 1 Sherman destroyed, the crew of which escaped alive. The Regiment was under almost continual shellfire throughout the day and this continued when night leaguer was formed in the previous nights position.
Casualties:-
Killed -SSM Brown MM
Wounded -Lt Copson MC
-Lt Alltree
-Lt Brodie
.
11 July  44
At first light B Sqn assumed A Sqn's position. Intermittent shelling during the day. A few enemy infantry with an OP shot up. At last light the Regiment was relieved by Canadian tanks and withdrew to an area North of MOUEN 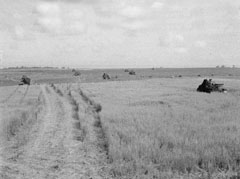 4CLY took part in Operation GOODWOOD 10-12 July. The plan was for a breakout by three Armoured Divisions, 11th Armoured Division (under General ‘Pip’ Roberts), Guards Armoured Division and 7th Armoured Division including 4CLY. Their objective was to cross the Orne Canal (over Pegasus Bridge) and the Orne River, to break out to the South East of Caen with their final objective FALAISE. They were to be supported by a major bombing operation which caused much damage to the German front line. However the German commander was aware of the impending attack and formed his Panzer Divisions into defence in depth with five lines of tanks and anti-tank guns including the formidable BOURGUEBUS RIDGE. Between them the 11th and 7th Divisions lost nearly 200 tanks in one day.

4CLY was the last regiment of the three divisions to cross the river which had caused little holdup. However once across it was apparent that the aerial bombardment had fallen on largely open country and the villages in the area were still held by the enemy. The following day, because of the much more open country than that so far experienced, 4CLY concentrated their 17Pdr Firefly tanks in the best fire positions in support of the units attacking those villages still held by the Germans. By the second day it was clear that the battle had lost its momentum. 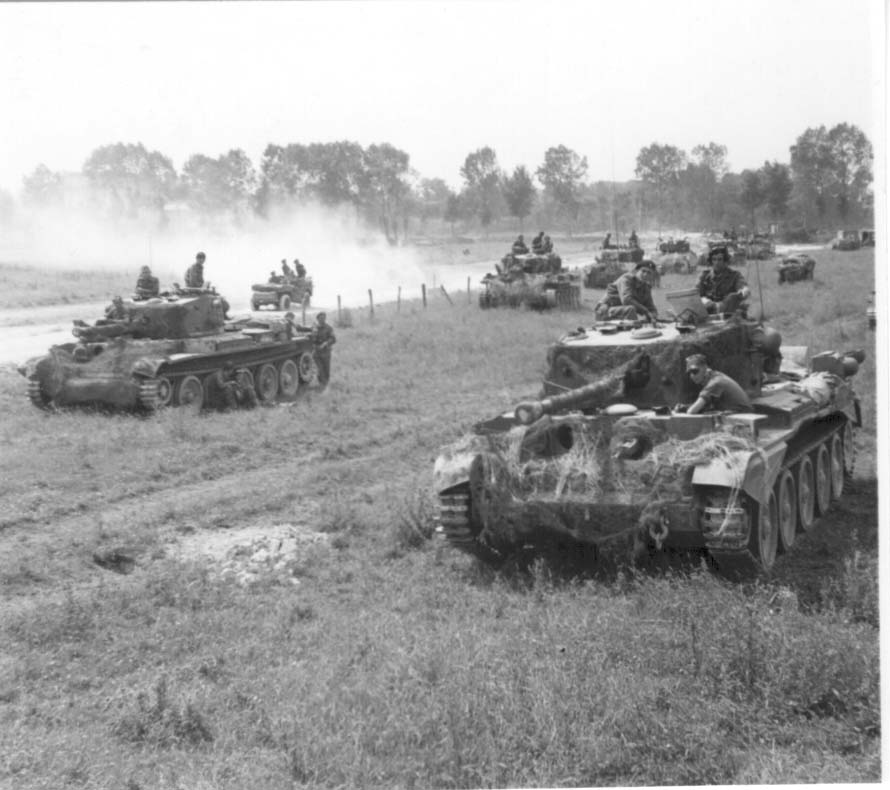 19 July  44
Moved up in reserve to 3 miles East of CAEN at 095670 TROARN.
Moved at 1700 to exploit 29 Bde's capture of BRAS and HUBERTS FOLIS. HUBERTS FOLIS was not captured until 2030hrs. Regt moved to position 1000 yards North of BRAS 0663. Strafed by enemy fighters, otherwise no enemy interference

20 July  44
Moved SW to attack VERRIERES feature 0460. 2Lt KG Horsley BEM, shot by sniper when advancing in recce vehicle. B Sqn established on Pt. 72. Met opposition of infantry and A/Tk guns and a Mark IV, which was forced to move. Heavy barrage put down in TROTEVAL 0561, and A Coy 1 RB moved on with tanks of C Sqn in support. Opposition proved too much, Coy withdrew successfully. A & C Sqns positions East of main road and NW of BRAS 0663.

1615 - approx 7 Mark VI moved across our front to attack B Sqn. Engaged by Fireflys of A & C Sqns; 2 brewed and one hit and rendered immobile. Medium guns engaged those out of view to us. Later confirmed by Canadians that five KO. A & C Sqns strafed by enemy rocket planes, no casualties.

Moved all troops East of road to make room for Canadians attacking in big offensive from IFS 0463 to VERRIERES 0561. Support given by two troops of C Sqn guarding left flank in the attack on TROTEVAL 052613. Fireflys remained in former positions, remainder of tanks moved back to 068648; remained there for the night.

1930 - C Sqn and Fireflys moved back to Regt area to leaguer for the night.