3CLY, on D+1, were due to land on Sword beach under command 51st Highland Division. Because of German artillery fire and congestion on the beaches, they landed 3 miles further west than intended at Mont Fleury-La Riviere. The first people they met on landing were 4CLY

At first light, about 0500, land was sighted and the convoy was now amid a mass of other shipping lying offshore. Moreover, we lay off the American sector, some miles to the West of 'M' & 'O' beaches which were at GRAYE-SUR-MER, and where we scheduled to land. Coasting East we were finally told to go in off MONT FLEURY LA RIVIERE, about 5 kilos West of our allotted beach. This caused some confusion, the tide being on the make but about half way up.

With the exception of one scout car and three 3-ton lorries all vehicles landed safely, the deepest wade being about 4ft 6ins. All LCTs did not beach on exactly the same part of the beach but eventually all assembled in the Assembly area at BANVILLE (9483) and de-waterproofing was completed.

Apart from one Firefly A Sqn was the only complete Sqn ashore and was detached from the Regiment for a special mission (see A Sqn Appendix).

In the evening B Sqn were ordered to report to OC 1st Gordon Highlanders who were at COLOMBIERS SUR SEULLES (9280) and then took up position in support if their two forward Coys in that area.

C Sqn were in support of the 5/7 Black Watch and took up defensive positions 935776. At nightfall they leaguered at LE FRESNE CAMILLY, 947778. At this stage we were supposed to have contacted the small advance party with Capt. Crowley MM, i/c but something had gone wrong

A Sqn having landed with 18 tanks on the morning of Jun 7th were ordered to support the 5th Black Watch in an attack on a pocket of resistance at DOUVRES. Also in support were a Sqn of AVRA (Churchill tanks armed with a block-busting petard), a battery of Fd Arty and in addition the RAF and Royal navy could be called upon. Liaison was made with the Canadians who were operating in this area.

It was necessary to obtain possession of a wood West of DOUVRES as this was the only point of observation on the town. Information obtained from a Canadian Brigadier showed the wood was held by the enemy, and he categorically stated that no Canadian troops were in the wood. The attack started at 1950 and was led by 2Tp of A Sqn. The wood proved to be empty of enemy despite the information received. Canadian troops were digging in among the trees. Shots were exchanged between the Black Watch and the North Shore Regiment and casualties were received on both sides.

On reaching the exit from the wood fire was opened from the radar station which consisted of 2 localities, one directly East about 400 yards and one SE 1000 yards. Two Canadian tanks moved towards the main radar station and were fired on and one tank set on fire. Sgt Barnshaw in one of the leading A Sqn tanks sustained injuries when his tank was hit by a small calibre AP shot. After some readjustment of positions 3Tp moved forward to the nearer locality and reached the wire perimeter. 2Tp and the AVRA worked forward to the main station and came under fire from larger calibre guns, probably 88mm. There was also some 50mm and possibly 75mm shooting but it was now 2130 and visibility was poor. Two AVRA advanced through the wire and immediately had their tracks blown off by mines. They discharged their petards at a gun emplacement and one was then hit by an 88mm or 75mm and blew up.

The Germans then laid smoke across their own front and under cover of this we withdrew. It was then decided to allow heavy bombers to attack the position and accordingly we evacuated the wood and leaguered some distance away

At first light C Sqn again took up positions at 035776 and B Sqn took up battle positions North of PIERREPONT 7397 facing SSW. B Sqn and RHQ were fired on by AP and HE from the South by what eventually transpired to be Canadian Shermans.

At about 1000 the two remaining LCT loads joined the Regiment.

At 1030 reports of 30 enemy tanks caused both Sqns to take up new positions of observation. B Sqn at 912776 and C Sqn in 912714, both being in the CULLY area. At last light the Regiment (less A Sqn) harboured and replenished in area 920800.
Casualties through shelling:- Tpr Taylor - wounded.

Area was heavily shelled in the morning, Tpr Ellis wounded. Nos. 1 & 4 Tps were moved out to watch the South and Southwest corners of the wood. It was now decided to shell the place with two cruisers. At 1500 A Sqn withdrew from the wood. The force then concentrated to the West of the wood and awaited the naval bombardment. This did not materialise as the FOOs and their infantry protection had been shot up. The Black Watch then re-entered the wood supported by A Sqn - 4Tp remaining in the FDLs overnight. In the evening Centaurs tried to shell the

B & C Sqns took up positions as in the day before and there was nothing to report. At last light the Regiment harboured in the wooded area 9278

A Sqn rejoined the Regiment and in the evening we were warned that we were going to make a wide sweep to the East of the river ORNE together with 51st Highland Div. Harboured in same area.

In the morning preparations were made for the move but at about 1330 this was cancelled as there was a threat of a counter-attack by the Germans, on the 9th Canadian Bde front, NW of CAEN. The Regiment then moved to the wooded area just SE of VILLONS LES BUSSONS, 005755 where it remained the night. There was intermittent shell fire the whole time.

The Regiment remained in the same area and no counter-attack was forthcoming. In fact at this time, according to PW reports, and Tac R, it was realised that the enemy was digging in fast and intended to make a stand. Intermittent shelling was experienced the whole time. The time was devoted to maintenance and rest.

The following sequence of 15 photographs taken by Major W H J Sale MC follow the 3CLY voyage to Normandy starting on 6 Jun when they loaded at Gosport. It takes them across the channel to the landing beach at Mont Fleury  on the morning of 7 Jun. They landed, followed directions to the dewaterproofing area and then drove through the Normandy countryside to their location in the Regimental concentration area.

It appears that they were fortunate enough to follow the whole journey without receiving a shot fired in anger.

The captions are those written by Major Sale at the time. 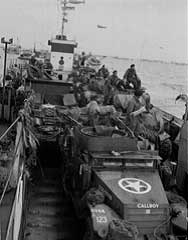 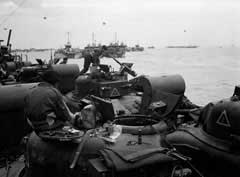 Our LCT (landing craft tanks) anchored off GOSPORT, assembling with remainder of convoy before sailing for NORMANDY. 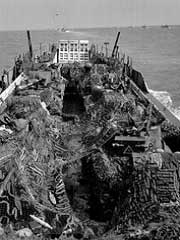 Our LCT now camouflaged shortly after leaving its anchorage 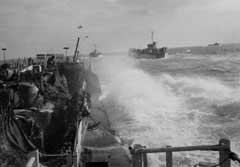 The LCT convoy crossing the CHANNEL. 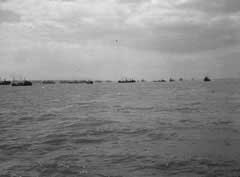 The Invasion Fleet off the NORMANDY Coast. 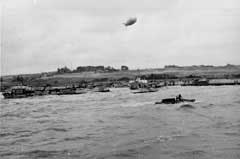 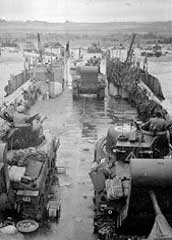 Tanks off-loading from an LCT. 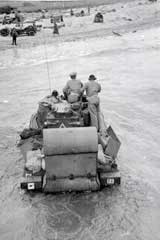 OC "A" Squadron, Major Woods, MC, and his tank, wading ashore on to King Beach. 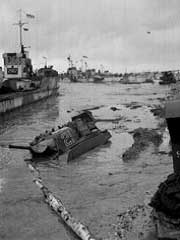 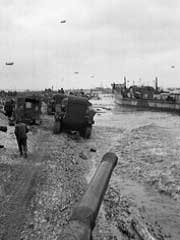 "A" Squadron tanks, having just landed, proceeding along the beaches to the de-waterproofing area 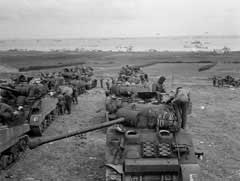 Tanks of the 3rd and 4th Sharpshooters in the dewaterproofing area. 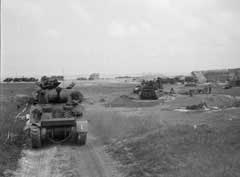 Tanks having de-waterproofed going inland passing some of the German concrete defences, part of the ATLANTIC WALL 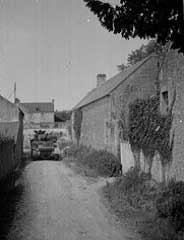 Photograph: Sgt. Freddy White's tank coming through the village of VER-SUR-MER after leaving the de-waterproofing area and moving to the regimental concentration area. 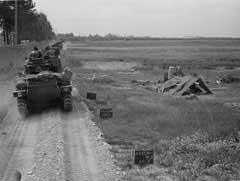 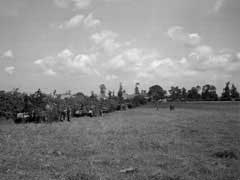 "A" Squadron Leader in the regimental concentration area.

4CLY reached the Normandy coast late on D Day 6 June but for the most part lay off-shore until the morning of 7 June. Some landed further east than intended and there met up with elements of 3CLY who had landed further west than they should have. The main body landed at Arromanches and Le Hamel. From there they moved to their concentration area near Bayeux

On the evening of 9 June, Brigadier Hinde commanding 22nd Armoured Brigade gave out orders for the 10th for 4CLY to move south west in the direction of Tilly-sur-Seuilles. Here they met for the first time the Bocage country comprising deep lanes and small fields separated by hedges. C Squadron advanced in support of the Gloucestershire Regiment to just short of Tilly which was entered by the infantry while the Squadron outflanked the village from the right. 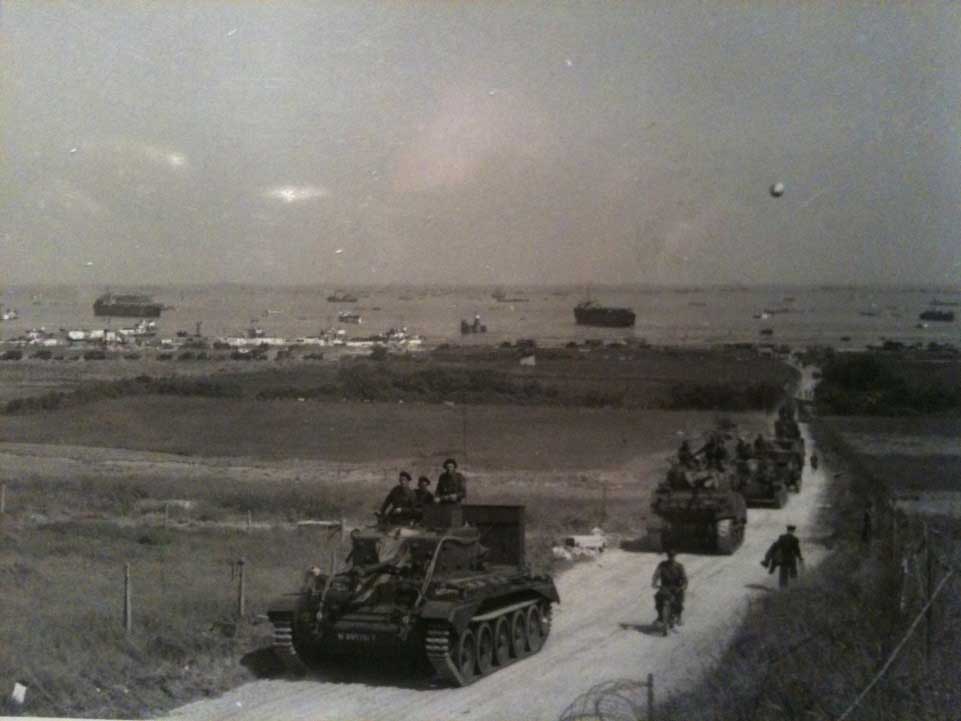 D Day. Pass BEACHY HEAD in morning, arrive at bridgehead and anchor at 2200. Slight aerial activity. Some tanks of the Regt unloaded.

CO makes recce as ordered in instructions for 8th Jun, sent out evening 7th Jun. 4 CLY in support of 151 Bde. Recce Sqn sent patrols out, no clashes with the enemy. Patrols reach area 810740.
1 OR wounded in action.

One Cromwell B Sqn KO in evening. Leaguer at 830707. One Coy Gloucester Regt in support, who mine bridges at MARCEL (829693) and at 833697.
Enemy infiltrated into BUCEELS during the night.

Recce Sqn advance to bridges at first light. Bridges held by enemy, but kept under observation. Attack by two Coys Gloucester Regt on left hand bridge; one Coy Gloucester Regt with C Sqn in attack right hand bridge. Both attacks successful and the first objective, the road parallel to river at 834695, gained. A & B Sqns remain in reserve area BUCEELS. Two patrols Recce Sqn pass through infantry, but held up at 839687 by two Panthers, one disabled on road and one covering. 2Tp C Sqn go round to left and destroy disabled Panther; infantry with PIAT destroy other. C Sqn advance to short of village TILLY-SUR-SEULLES in support of Gloucester Regt, who entered TILLY (8468). C Sqn withdraw to outflank town to right; close country encountered and one troop is ambushed area 832690 (3 Cromwells, 1 Firefly under Lt TS Vine).

C Sqn and Recce withdrew to battle positions North side of river (830695) to support Gloucester Regt who were being counter-attacked.