In the winter of 1943-44 the weather and terrain meant that little progress was made by the Anglo-American Armies. Back in London the minds of the Allied High Command were concentrating on the invasion of Western Europe expected in the early summer of 1944. One of their priorities was to bring back to the UK some of the more seasoned units of the British Army who had been fighting for 2-3 years in the Western Desert, Sicily and Italy. Among these were the 7th Armoured Division, 22nd Armoured Brigade, which included 4CLY and 4th Armoured Brigade, an independent formation, which included 3CLY.

3CLY arrived back in early February 1944. After disembarkation leave, much looked forward to by Sharpshooters and their families, the regiment was sent to Worthing on the Sussex coast where their tanks were parked in ordinary residential streets. From here they were able to train on the South Downs. They still used the Sherman tank with the 75mm gun but were also issued with the Firefly (one per troop), which was upgunned with the British 17Pdr gun. On 3 June they moved to the marshalling area near Portsmouth. 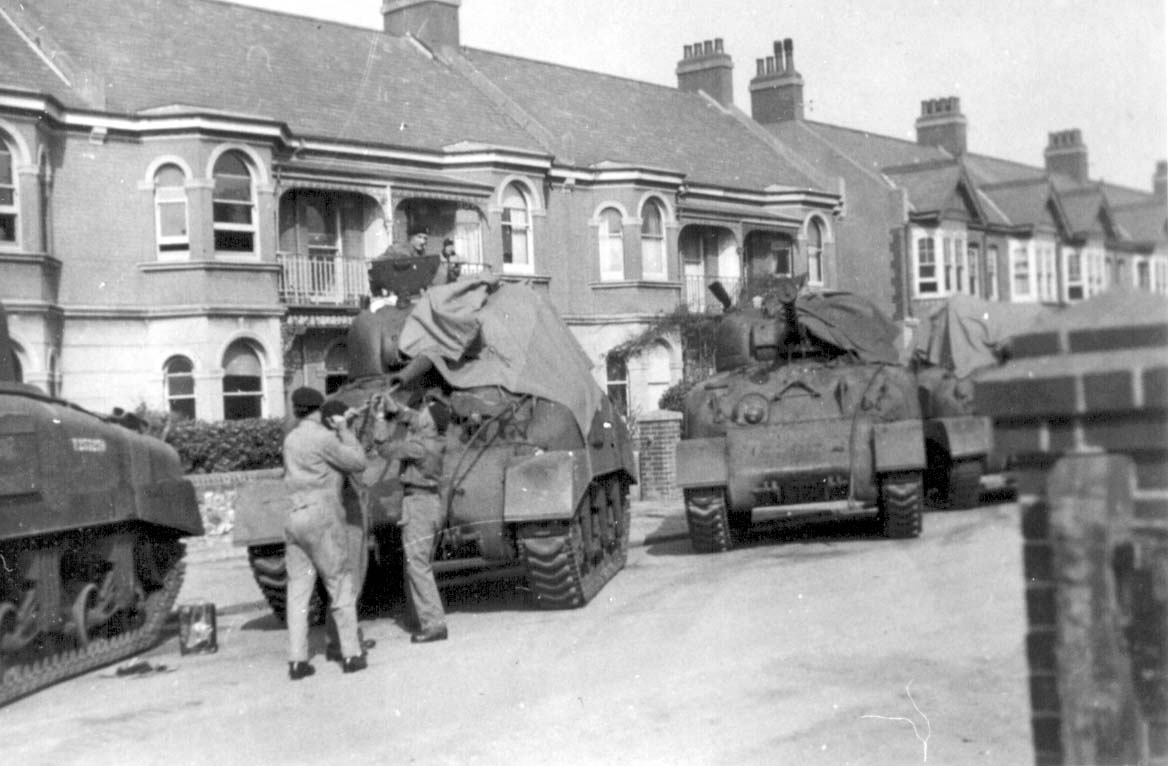 Sherman tanks of 3CLY in Navarino Road, Worthing May 1944

3 June 44
At 0145 orders were received from SE Command for the Regiment to collect Movement Order by 1400 hours this day. These were collected and they stated that the Regiment was to proceed to the Marshalling Area some 8 miles to the North of PORTSMOUTH

6 June 44
The Regiment left the Marshalling Area and moved down to GOSPORT to embark. The move was made in LCT packets, the packets being mixed, containing a portion of Shermans, AA tanks, Recce and Ech, also all HQs were split. The move to the 'hards' began at 0530 and each packet moved at varying intervals, the last leaving in the afternoon.
There was considerable congestion at the hards, as two embarkation points previously allotted were at the last moment used for the landing of casualties. Vehicles were embarked in LCTs Mk 4 which carried 9 vehicles of which 8 could be Shermans. When loaded the LCTs joined a much larger convoy and lay off shore from 1 to 3 hours, finally sailing sometime during the afternoon. Two LCTs had to return to the hards owing to excessive loading and these unfortunately included both B & C Sqns troops of 'Fireflys' and the COs tank. Both the CO and the Adjt overcame the peril of the sea by jumping from their LCT to another ship and there joining the 2i/c (Major AW Grant MC) on his LCT, whilst on the move.
We sailed throughout the hours of darkness and had an uneventful crossing except that one LCT containing RAF personnel was sunk, believed by an E-Boat. 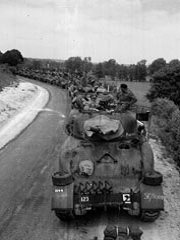 Dispersal point short of GOSPORT. From here the regiment proceeded to its concentration area near the loading hards

After disembarkation leave, they found themselves in High Ash Camp, part of Thetford Forest in Norfolk where they had a large military training area at their disposal.

In May 1944, 4CLY moved to Orwell Park near Harwich and on 1st June began loading in to invasion barges. 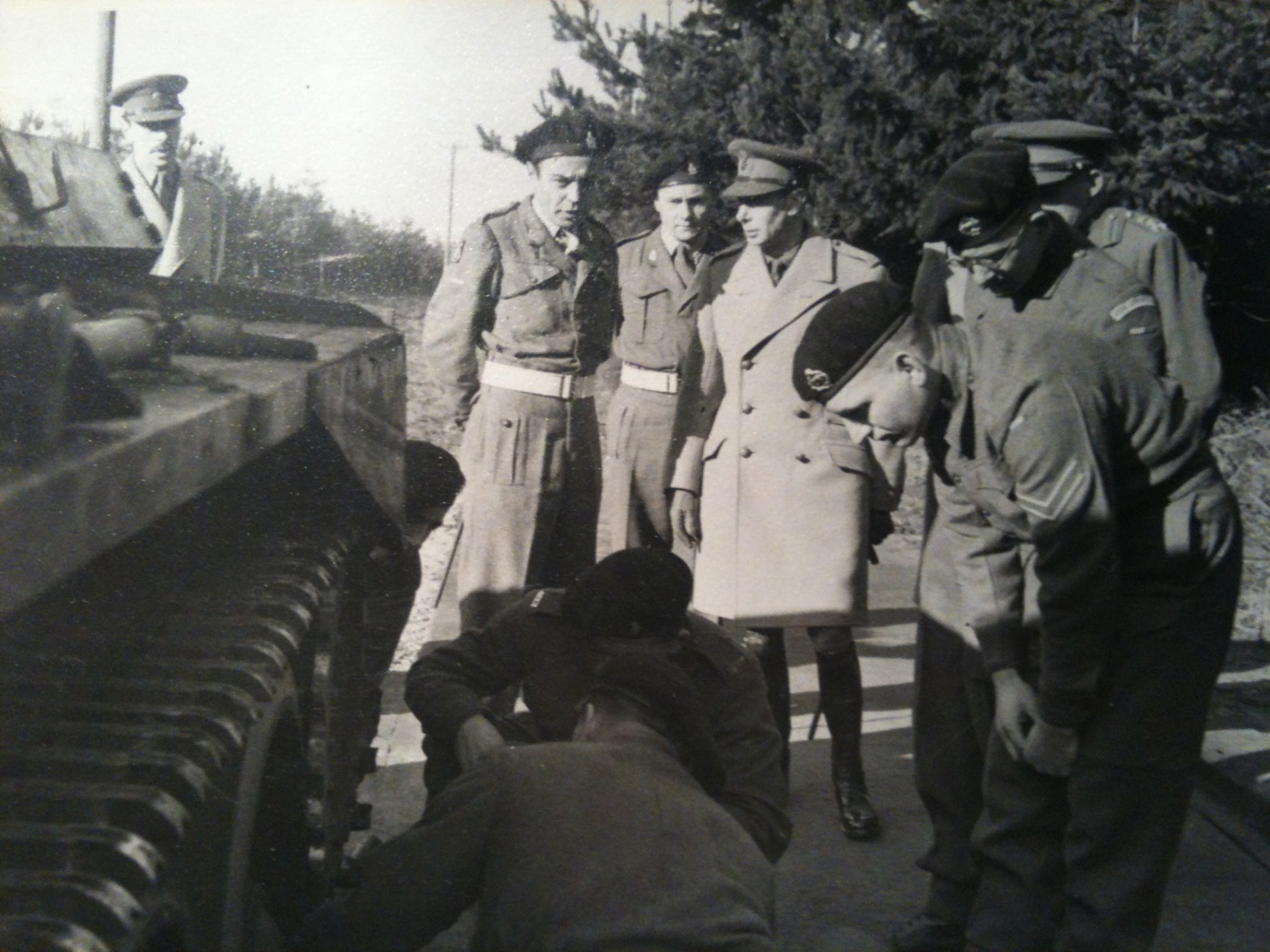 4CLY War Diary
8 May 1944
Moved by road to concentration area in Camp R5, ORWELL PARK SCHOOL, near IPSWICH. Residue remained at Thetford to rejoin us overseas later. B Echelon concentration area is in WEST HAM STADIUM.
9 May 1944
Started to waterproof all tanks and vehicles.

26 May 1944
All waterproofing now complete, except for the finishing touches to some vehicles.

28 May 1944
Officers briefed by GOC regarding the forthcoming operation. Maps issued under seal.

1 June 1944
First party of Regt moved at 1630 to docks at FELIXSTOWE; loading of LSTs and LCTs commences.

3 June 1944
Ships anchor in rivers ORWELL and STOUR when loaded.

5 June 1944
Move out from river at 0915, move along coast of SE England, passing STRAITS OF DOVER in darkness