Following their landing at Salerno on 22 Sept 1943, 4CLY set off on a long slow march up the coast through narrow mountain roads, meeting obstacle after obstacle and suffering casualties from mines and shell fire until, with the whole of 7th Armoured Division, they were halted on the line of the R.Volturno.

B Sqn take over 5 R Tks positions SOUTH of VOLTURNO. Plan is now not to make crossing with initial attack but to go over one tp at a time when bridgehead is established

A and C Sqns return from waterproofing. C Sqn go up to support 1/5 QUEENS. A Sqn in reserve under 22 Armd Bde at immediate notice. Barracge for attack commended at 2025 hrs

46 Div pushed 4 Bns over river supported by 40 R Tks landed by LCT. AMERICANS on right pushed on unopposed. B and C Sqns shelled individual small targets with some success. At 1130 hrs A Sqn ordered to move up at first light under comd 131 Bde.

RE with our help prepare banks for tanks to ford river. After very strenuous efforts, by 0530 hrs two tps of C Sqn managed to cross VOLTURNO and so fulfil promise to infantry

Although very heavy rain fell all night and ford became deeper and banks more dangerous the whole of C Sqn was take over by last light. A Sqn standing by to move up.

C Sqn patrolling up to 3000 yds NORTH of river and supporting inf.

A Sqn moved up to ford river. All across with the exception of one tank drowned. B Sqn move back to LUIGI RAZZA

By now it was apparent that, by the very nature of the ground, it had become an infantry battle. The line of the R.Volturno was taken over by 131 (Queen’s) Infantry Brigade and 4CLY was put under their command in case tank support was required. The Infantry eventually managed to establish a bridgehead over the river and, in due course, with some difficulty, the bulk of the tanks also crossed to provide support on the more open ground on the north side. Shortly after 4CLY were pulled back some 30 miles into reserve and saw no more action in Italy. 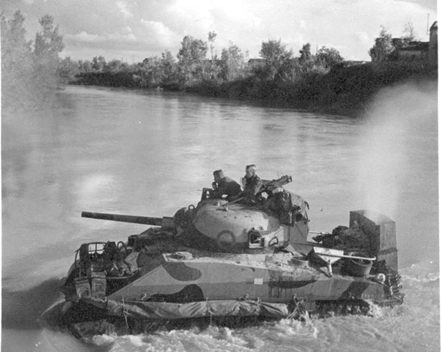 I reconnoitered the river bed where the river was some 70 yards wide and 6-7 ft deep with a gravel bottom. I thought we might get the tanks across if we could carry their exhausts to turret level and bung up the obvious holes.

I spent a day with the REME where we fixed the exhausts with an open 40 gallon drum and a flexible tube to the exhaust outlet. We made a mixture of tar, clay and sand which we smeared around the turret and other openings, We went across the river shut-down with the water half way up the turret