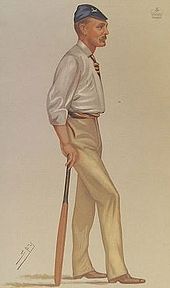 Lord Harris, was born at St. Anne’s, Trinidad on 3 February 1851, where his father was Governor.

After some years in India, when his father was Governor of Madras (now Chennai), he returned to the family home at Faversham and spent two years in London before entering Eton.

In 1870, at the age of 19, he joined the Kent Committee, which was established to manage the new Kent County Cricket Club formed that year. His father was the first President.

Harris made his first class debut for Kent against the MCC (Marylebone Cricket Club) at Canterbury in August 1870.